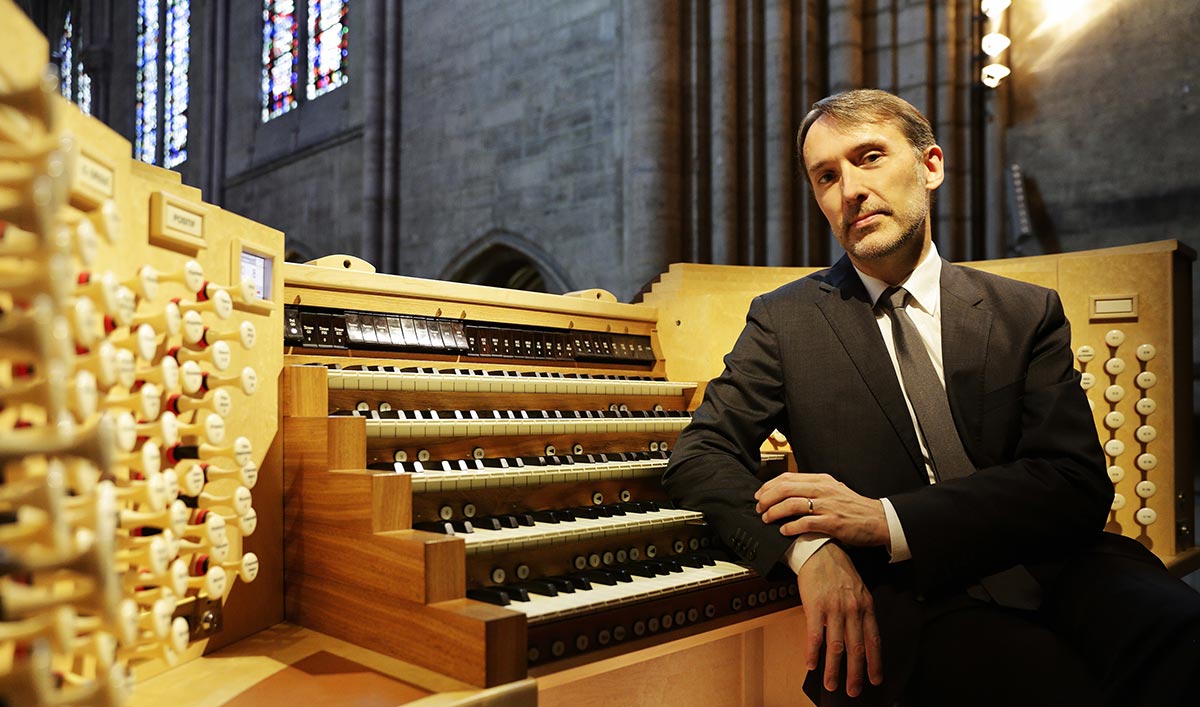 Established as the leading worldwide ambassador for his instrument, French organist Olivier Latry has performed in the world’s most prestigious venues, been the guest of leading orchestras under renowned conductors, recorded for major labels and premiered an impressive number of works. Named titular organist at Notre-Dame in Paris at the age of 23 and organist Emeritus at the Orchestre National de Montréal since 2012, Olivier Latry is first and foremost an accomplished, thoughtful and adventurous musician, exploring all possible fields of the organ music, with an exceptional talent as an improviser.

Recent and future highlights include the premiere of Kaija Saariaho’s Maan Varjot for organ and orchestra with the Orchestre Symphonique de Montréal, Orchestre National de Lyon and Philharmonia Orchestra in 2014, and the premiere of Michael Gandolfi’s concerto with the Boston Symphony Orchestra in 2015. He premiered Benoît Mernier’s organ concerto for the inauguration of Brussels’ BOZAR new organ in 2017. During the 2017 – 2019 seasons, Olivier is artist in residence at the Dresdner Philharmonie.

His strong attachment to the French organ repertoire led him to record Olivier Messiaen’s complete works for organ for Deutsche Grammophon which he also performed in recitals in Paris, London and New York. In 2005, he also recorded a César Franck album for Deutsche Grammophon. Among several other recordings, Olivier also recorded Saint-Saëns’ organ concerto with Christoph Eschenbach and the Philadelphia Orchestra for Ondine. In 2013, he released Trois Siècles d’Orgue à Notre-Dame de Paris on the Naïve label, which features music composed by past and current organists of Notre-Dame Cathedral. In 2016 he recorded for Warner Music at the Philharmonie de Paris’ magnificent Rieger organ, which he had inaugurated earlier in the year. In March 2019, he will start a collaboration with La Dolce Volta label with an album called “Bach to the Future”. Recorded on Notre Dame de Paris’ organ, the project will feature Bach’s transcriptions and original works adapted to this extraordinary instrument.

A former student of Gaston Litaize, Olivier Latry now teaches at the Conservatoire National Supérieur de Paris, and is a recipient of numerous international distinctions and awards worldwide, including the Prix de la Fondation Cino et Simone Del Duca (Institut de France–Académie des Beaux-Arts) in 2000, and “Honoris Causa” Fellowships from the North and Midlands School of Music (UK) in 2006, and from the Royal College of Organists (UK) in 2007. He was also named International Performer of the Year by the American Guild of Organists in April 2009, and received an honorary Doctor of Music degree from McGill University in Montreal Canada in 2010.